World’s Oldest Living Memories. Of Bristlecones and the First Beggar 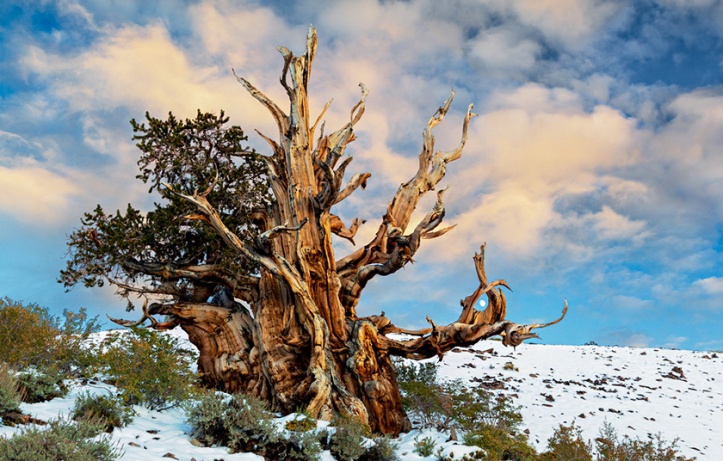 It was with conflicting emotions of fear and pride in her agility and balance that we watched our eight year old granddaughter stretched out horizontally on a branch of a huge Live Oak tree. We were hiking with the family in the Sunol Wilderness Preserve east of Fremont California, and had stopped and to cool ourselves at a place where a creek ran close to the trail. Our beaming young adventurer evoked the easy grace and repose of a panther … alert, watchful and confident.

“How old do you think this tree is Aba?”  Raina called down from her lofty perch.

A few minutes later, she clambered down, as easily as she went up, and asked her next question.

“How old is the oldest tree in the world Abo?” (Aba and Abo are her monikers for Abuela and Abuelo)

“Probably about 4000 years. It’s a bristlecone pine tree here in California.” I was pleased to take my turn at being the chosen adult fount of knowledge and wisdom. In that moment I was reminded that being in the presence of one of these ancient trees remained very high on my list of wild places that I’ve hoped to experience in my increasingly limited human life span.

It turns out that my estimate was short by at least 500 years and, and as research continues to refine the technology of tree ring dating, new candidates for the earths oldest tree are likely to be discovered.  The current record holder, The Methuselah Tree, sent it’s first shoot up soon after the completion of the Great Pyramid of Giza.

Tree rings it turns out are incredible repositories of detailed and amazingly accurate records of climate change over thousands of years. They are helping to refine archeological timelines, and to show how trees from one end of the world to the other provide congruent evidence of major climate disruptions such as major volcanic eruptions and their connection to the very rise and fall of civilizations.

Speaking of the possible rise and fall of ours and future civilizations, take this as good news or bad news as you will, but it seems likely that our Bristlecone plant elders will outlast human tenure on our blue but increasingly hot planet.

My sister recently sent us a copy of The Hidden Life of Tree: What They Feel, How They Communicate-Discoveries from a Secret World, by Peter Wohlleben.

Wohlleben suggests that we need to broaden our ideas about plant consciousness, as research increasingly suggests numerous and previous undiscovered ways that trees communicate with each other, responding both to general threats and needs of individual members of their community who may be struggling.

With that paradigm shaking thought in mind, one wonders what the Methuselah, Prometheus, and their Bristlecone brethren might tells us about what they “remember” of the times they have lived through.

Thinking about ‘ancient memory’ brings me to a story inside a larger story inside an even larger story. It’s the Story of the Seven Beggars by Rabbi Nachman of Braslav. The story of the first beggar, the blind beggar, reveals that he is not really blind at all, but is one that all earthly time does not touch. He reveals that,“I am very old and still quite young, and I have not yet begun to live.”

He then tells a story about a group of shipwrecked souls who wash up on an island and pass an evening by proposing a kind of story telling contest. Each must tell of the earliest memory that they can recall.  The honor of responding first went to the oldest of the company.

Here in turn from oldest to youngest were their earliest memories.  (Quoting Martin Buber’s translation here)

“I remember the day when one broke the apple from the branch.

“ But I still think of the time when the light burned.”

“ I can recall the day when the fruit began to form.”

“ But my thoughts reach unto the hour when the seed fell in the flower-cup!”

“And to me is still present how the flavor of the fruit entered into the seed.”

“And I still have within me, how the shape of the fruit joined with the bud.”

“But I, who at the time was still a boy,” replied the beggar, “was also with them. And I said to them.  I recollect all these occurrences and I recollect nothing at all.”

The company were all greatly astonished that the youngest had the earliest memory and the child knew of the most ancient happening.

Rabbi Nachman’s tales are layered with meanings within meanings, and various interpretations of that exchange are fascinating to ponder. This particular passage is often said to be a reflection on the stages of human development. No wonder then that I’ve been grappling with this tale for more than 20 years and have only occasionaly ventured to tell small snippets.

One story inevitably leads to another. An anecdote that seems linked to the First Beggars’ tale is the one that is told the four year old sister who questions the new baby.  “Tell me what God is like… I’m beginning to forget.”

It is said that most people’s earliest memories are from around age three and a half.  Yet I feel sure that I remember looking up from what must have been a baby carriage, to see my maternal grandmother kvelling over me, and a feeling of being bathed in a shower of love. That must have been close to the time that “the apple was broken from the branch.”

Over the course of several days I once interviewed my then 87 year old Alaskan friend Poopdeck and asked him about his oldest memory from his childhood in Montana.  As he recalled, he was three or four and navigated a toy wheelbarrow down to the corner where a man had a popcorn stand and asked for a fill-up.

I encourage you to share your first memory in the comment section here.  Perhaps like the first beggar someone will remember all the way back to the primordial beginning before the beginning!

A month after that Sunol hike with the family, we spent a week telling stories in Las Vegas schools. One afternoon we drove out of the heat and frenetic buzz of the city and 35 miles northwest up the road to Mount Charleston and into the Spring Mountain National Recreation Area.  By the time we reached about 10,000 feet, the temperature had dropped almost 25 degrees.  A stop at the visitor center to check out maps left us delighted to find that among the many paths we could follow, there was a Bristlecone Pine Trail!  Our choice was easy!

The trees along this trail don’t match Methuselah or it’s neighbors in the White Mountains of California for their antiquity, the oldest being a mere 3000 years old. But it was a beautiful day in the here and now and the perfect place to “find ourselves in the trees, and find the trees in ourselves.”

I live but a short walk to the Middle Rio Grande River Bosque, and one of the finest stands of mature cottonwood stands in the region. It’s now time to close here, get up from my lofty writing perch on the couch, and get down to the River. 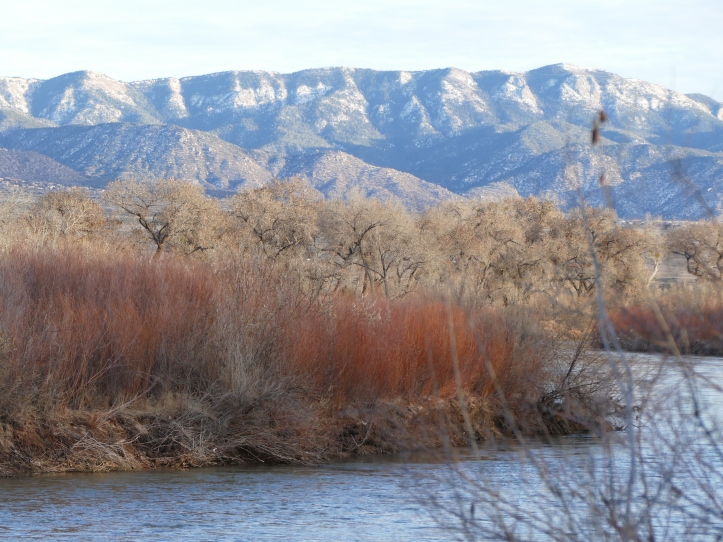 Understanding the world by tasting it