Got past security on my flight to Juneau.  Managed to smuggle Mumsie past the TSA agents.  No, I didn’t have my mother stuffed into a satchel but rather in white powder form inside a small ziplock bag.  It was with great relief that I was able to revive her upon my arrival in Skagway.  A little water and a few days later she was happily bubbling away.  Mumsie… aka Mother… aka my treasured sourdough starter.

This particular mother was a gift from my New Mexico neighbor and baker extraordinaire Amy.  She started it from wild yeasts in San Fransisco a dozen or so years ago and I’d managed to keep it going for several years now.  I left a jar in the safekeeping with my wife Liz at home, but was determined to do what the sourdoughs on the Trail of 98 did.  Bring some up north with me.  I’d have to wait a few more months though before I’d be able to add hand-picked blueberries to what would become my weekend sourdough pancake ritual. 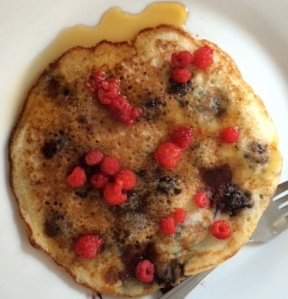 Sourdough!
1. leaven,  consisting of fermenting dough, typically that left over from a previous batch. 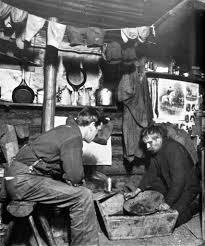 2.an experienced old timer or prospector in Alaska and the Yukon

How did these two uses of the word get conjoined?  Certainly the leaven came first since the history of sourdough in baking goes all the way back to Egypt and ancient Greece. Picture this.
Those gold seekers tramping up the frozen Chilkoot trail were carrying their mumsies with them too!  I mentioned in my previous post that  in order to get through Canadian  customs at the summit they were required to present themselves with a ton of goods, mostly food, to prove that they could sustain themselves for a year and not become burdens of the state.  Chief among the supplies would typically be about 350 pounds of flour.  On the Chilkoot the flour would be carried on one’s back (or if you could afford it, on the back of a native Tlingit packer) But the treasured sourdough would be kept closer to the heart, so as to keep the culture warm and alive.

The Boudin Bakery in San Fransisco has kept the 1848 California Gold Rush sourdough alive through all these years, and today in Skagway Alaska, there are a number of people who claim that their ‘mothers’ have a clear lineage to the days of 98.  In fact there is a National Park Ranger working there now,  I call her Sourdough Girl, who is keeping such a culture and working on a P.H.D centered on biological, social and economic considerations of lacto……

My fascination with sourdough also goes beyond the strictly culinary and veers towards the metaphorical.  This is of course symptomatic of my incurable affliction – Story Fever.   I think of sourdough as a particular kind of fairy gold.  The secret of fairy gold if you haven’t heard is that it  only has value when you give it away… the more you give it away the bigger it gets.  I tell you a story, you tell it to someone else, they tell it to someone else and the story gets bigger, not smaller from the giving.  Hoard it and it will soon turn leaden or to ashes and blow away.

Well, sourdough is like that.  How is it that these original cultures endure through countless generations.  Generosity!  And how does the sourdough stay fresh?   You use the culture in your jar or crock to make pancakes or bread, but you always leave some of the mother behind, and then feed it once again, giving those bacteria some fresh flour to work their magic with.

Moving from bread to alcohol, beer and wine, for a moment- I can’t get into this subject of fermentation without mentioning my mentor Poopdeck, a true sourdough if ever there was one. Knock on his door, walk in and within moments whether he knew you or not, he’d take you into his basement and pick out a jug of Bug Juice and offer you a glass.  When you asked him why he called it Bug Juice he’d pause for a pregnant moment and reply,  “Walll… jest think of those billions and billions of yeast bugs that committed suicide to make this alcohol.”

Ah, almost forgot… in Alaska lingo, the opposite of being a Sourdough is to be a Cheechako.  A Cheechako  is a greenhorn or tenderfoot.   I’d often start my tours this way… “ Folks, when I first landed in Alaska in 1970, I was a Cheechako… a young, green, no nothing kid from the suburbs of New York.”  And so I was!

So, now having paid my respect to the fairies,  the lactic acid bacteria, the Klondike Argonauts as they were called, and to my fellow storytellers here and gone, all of who have shared their powers and secrets with me,  I think I’ll go check on Mumsie (thank you Liz who has cared so lovingly for her!)and continue my reflections on my Skagway guiding  adventure in the next post.